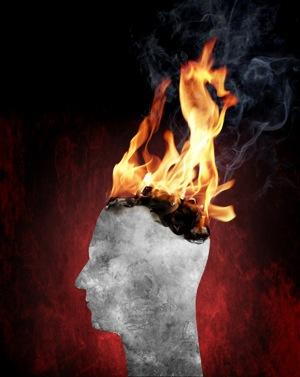 Do you suffer from brain fog — that spacey, detached feeling like your head is in a fish bowl? Do you suffer from depression, or does your child have autism? Are you concerned about Alzheimer’s? These conditions are signs of possible brain inflammation, or a brain “on fire.”

Although a head injury or infection are commonly associated with severe cases of brain inflammation, many people suffer from milder but chronic brain inflammation, which is linked to a variety of symptoms such as brain fog, depression, autism, or Alzheimer’s.

As a clinical nutritionist and chiropractic neurologist, I support patients from Guilderland, Loudonville, Delmar, Colonie, and other areas of the Capital District in my Clifton Park, NY office for various chronic health issues, including brain fog, depression, autism and ADHD, memory loss, and autoimmune disease. In some cases I also use functional neurology approaches to rehabilitate underlying imbalances in brain function, which can also contribute to immune imbalances and allergies.

Unlike most of the body, the brain does not produce pain when inflamed. Instead, one of the most common symptoms is brain fog, which makes people feel spaced out and disconnected. As Datis Kharrazian, DHSc, DC, MS explains in his book Why Isn’t My Brain Working?, this is because brain inflammation slows down the conduction between neurons. As a result, brain function slows, which causes that slowness and dullness of thinking.

Studies also show depression is linked with brain inflammation. Inflammation creates immune proteins called cytokines. These cytokines can impair brain function and the brain chemical serotonin; low serotonin is frequently linked with depression. In fact, up to a third of patients with hepatitis C who are given interferon, which increases cytokine activity, develop depression, mania, and hypomania.

So what can be done about brain inflammation to protect brain function? In his brain book, Dr. Kharrazian outlines a number of approaches:

Ask my office for more information on how to manage brain inflammation for better brain and body health.

In my Clifton Park, NY office, I offer patients from Guilderland, Loudonville, Delmar, Colonie, and other areas of the Capital District support for chronic health conditions, including brain fog, depression, memory loss, Alzheimer’s, and autoimmune disease. I also address such neurological disorders as depression, anxiety, ADD/ADHD, autism spectrum disorders, and other brain-based issues. I use the foundations of functional medicine and functional neurology, which can significantly improve health and reduce the risk of more serious disorders.